Keep in mind that, while first-hand experience with hunger is surely a reason to compose a poem about it, you don’t have to have been hungry to speak up about it.  All of us can contribute to the Poetry X Hunger cause by writing a poem about hunger – its causes, its history, or its impacts.  Through our poems, we can raise awareness in the fight against hunger.
And, when you’ve finished your poem, feel free to share it with us at PoetryXHunger@gmail.com.  We may want to post it on this site, but will always ask your permission before doing so.
So, Create!

Prompts to help you get started

​Here are some prompts that may help get you started…

1. Begin your poem with one of the following phrases…
​“This is what the hungry say…”
“The hunger years were then and are now…“
“This is what it will take to end hunger…”

2. Write a poem that incorporates a phrase from an historical account of hunger such as… From the Ancient Mediterranean Region --  “…some wasted away like ghosts of the departed…”  from Eusebius, AD ~260-340 as quoted in Garnsey, Peter. 1988. Famine and Food Supply in the Graeco-Roman World: Responses to Risk and Crisis. Cambridge Univ. Press. 303 pp.

From the Sudan --  “When you don’t have anything to eat, you just think about eating.  Your stomach grumbles, and then it hurts, pinching, and you have no energy.  When you’re really starving, your stomach hurts until you don’t want to do anything.  It feels like your whole body is shutting down.”  From a quote by “Martha” on page 78 in  Bul Dau, John and Martha Arual Akech with Michael S. Sweeney and K. M. Kostyal. 2010. Lost Boy, Lost Girl: Escaping Civil War in Sudan. National Geographic Partners, LLC. 159 pp.

From Colonial Jamestown -- “…wi[i]th the allowance only of a pinte of Indian Corne to each man for a weeke, and that allowance of Corne continued to them, but two weeks of the nyne w[hi]ch kind of feedinge caused all o[u]r skins to peele of from head to foote, as if wee had beene flead…”  From 1623-24, A Briefe declation [sic] of the Plantation of Virginia duringe the first twelve yeares, when S[i]r Thomas Smith was Governor of the [Virginia] Company [of London], and downe to this p[re]sent time: by the auncient Planters now remaining alive in Virginia. The Virginia Company Archives, Magdelene College, Oxford University.

From Soviet Russia -- When the snow melted true starvation began. People had swollen faces and legs and stomachs.  They could not contain their urine…And now they ate anything at all.  They caught mice, rats, sparrows, ants, earthworms.  They ground up bones into flour, and did the same with leather and show soles; they cut up old skins and furs to make noodles of a kind, and they cooked glue.  From Grossman, V. 1972, Forever Flowing, New York, p. 157 as quoted in Conquest, R. 198. The Harvest of Sorrow: Soviet Collectivization and the Terror-Famine.  Oxford University Press.  412 pp.

Maybe this piece of art by Diane Wilbon will also prompt you to write in response to her artwork! 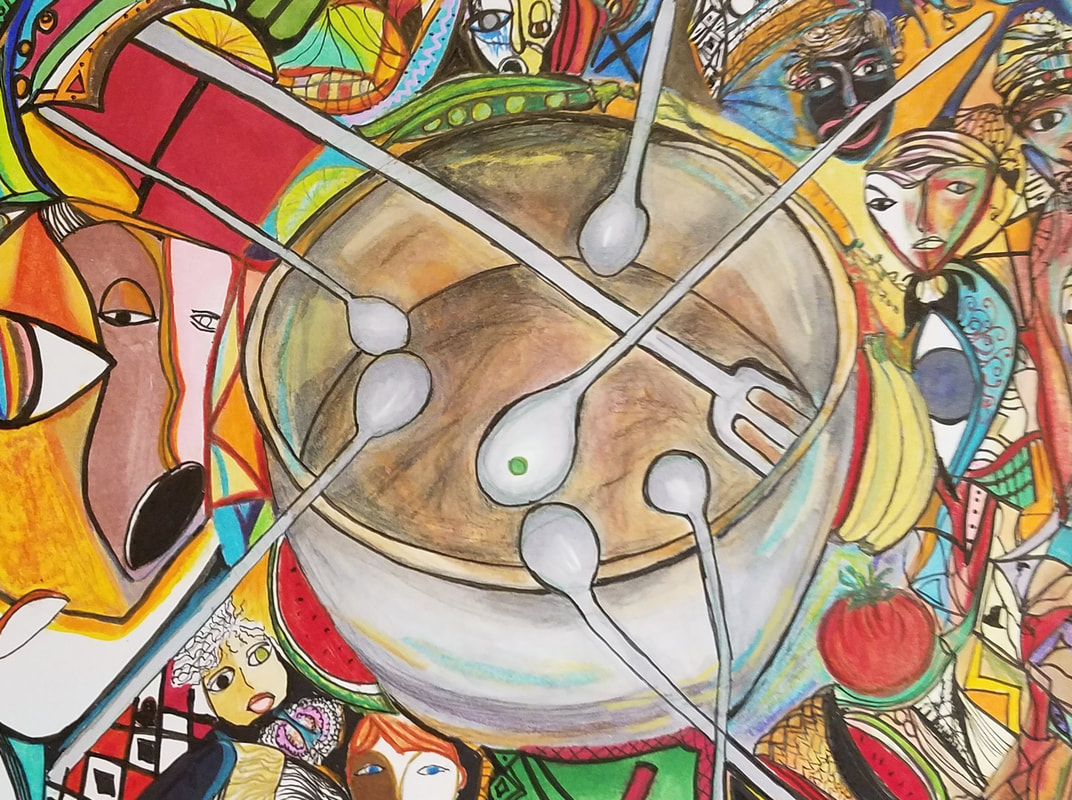 My hope is to inspire and to influence.
These particular pieces reach out from the depths of a bowl, which is representative of my soul wrestling with the universal issue of hunger. I wanted to create a sense of desperation that would affect and encourage change when a viewer looks into the oversized, hollow bowl, with elongated spoon handles leaning, standing, pointing in every direction - symbolic of the extended reach of long arms and cupped hands from different countries, states, cities, towns, and communities that are plagued with hunger.  The fork stands out as a figurative reference of stretched fingers waiting for change. The one pea on one spoon speaks clearly and loudly to the extreme scarcity that exists.  Everything outside of the bowl could be a part of the solution.
​Poet and Visual Artist, Diane Wilbon Parks